I worked with Dominique Perrault during my time in Paris. This trailer shows

"The movie is constructed as raw account of how some of the best architects in the world, design giants, toil, struggle and strategize to beat the competition."

Jean Nouvel, Frank Gehry, Dominique Perrault, Zaha Hadid and Norman Foster are selected to participate in the design of the future National Museum of Art of Andorra, a first in the Pyrenees small country. Norman Foster drops out of the competition after a change in the rules that allow the documentary to happen.

Three months of design work go into the making of the different proposals, while, behind doors, a power struggle between the different architects and the client has a profound impact on the level of transparency granted by each office to the resident documentary crew, and which has a definite influence in the material shown in the film.

A production by Office for Strategic Spaces (OSS) www.o-s-s.org

Have a look inside my sketchbook

Have a look inside my sketchbook

Come and see my work at the Bartlett Summer Show!

Very excited to have my work featuring in this publication! 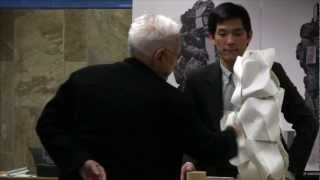